iara lee’s feature documentary, Cultures of Resistance premiered in 2010. In 2003, on the eve of the Iraq war, iara embarked on a journey to better understand a world increasingly embroiled in conflict and, as she saw it, heading for self-destruction. After several years, traveling over five continents, iara encountered growing numbers of people who committed their lives to promoting change. This is their story. From Iran to Burma to Brazil to Palestinian refugee camps in Lebanon, Cultures of Resistance explores how art and creativity can be ammunition in the battle for peace and justice. The feature documentary continues to show across the United States and internationally. It is now available on DVD and Video on Demand.

Does each gesture really make a difference? Can music and dance be weapons of peace? In 2003, on the eve of the Iraq war, director iara lee embarked on a journey to better understand a world increasingly embroiled in conflict and, as she saw it, heading for self-destruction. After several years, traveling over five continents, iara encountered growing numbers of people who committed their lives to promoting change. This is their story. From IRAN, where graffiti and rap became tools in fighting government repression, to BURMA, where monks acting in the tradition of Gandhi take on a dictatorship, moving on to BRAZIL, where musicians reach out to slum kids and transform guns into guitars, and ending in PALESTINIAN refugee camps in LEBANON, where photography, music, and film have given a voice to those rarely heard, CULTURES OF RESISTANCE explores how art and creativity can be ammunition in the battle for peace and justice.

People in the Film

CULTURES OF RESISTANCE does not focus on one place in the world where a military unit or private corporation is violating a group of people’s human rights. Instead, the film looks at conflicts all over the world and seeks out artists who devote their work to fighting injustice and violence.

Poets for Peace Medellín, Colombia, a city once notorious for drug violence, is reinventing itself as a world center for the living word. We attend the Medellín International Poetry Festival, which has been instrumental to this transformation by bringing the work of poets committed to promoting peace and social justice to the wider public. Founded in 1991, when the streets of Medellín were at their worst, organizers envisioned the festival as a form of artistic resistance against injustice and terrorism at the hands of drug cartels and the military. Over the years the festival has brought 1,000 poets from over 140 countries to Colombia and in 2006 received a Right Livelihood Award, widely known as “The Alternative Nobel Peace Prize.

Iranian Graffiti Artists In Iran we encounter citizens who are at once patriotic—in rejecting heavy-handed threats from the U.S.—and critical of their own government—taking personal risks to demand greater political freedoms. Among these are the so-called Tehran Rats, a group of graffiti artists that under the cover of night expresses its dissent with spray-paint on city walls. As one of their members says, “good art is something that moves and shakes you.”

Rwandan Women Leadership In Rwanda, where a greater proportion of women serve in the legislature than in any other country, we meet Hutu women who risked their lives to protect Tutsi children during the country’s 1994 genocide. One survivor, standing next to the rescuer who put herself in danger to help him, describes his experience: “She took me into the house and suggested that I hide up in the roof,” the survivor says. “I came out after three months, together with this brave woman.”

Liberian Cartoonist In Liberia we encounter Leslie Lumeh, a survivor of his country’s civil war in the 1990s, who has since made sketches to recreate scenes from the conflict. Lumeh’s work was featured in a short documentary that aired on a local television station in Monrovia, which provoked then-president Charles Taylor to force the artist and his family into exile. Since his return home in 2005, his work has been widely welcomed and he continues to draw and paint to encourage ongoing peace in Liberia.

Brazilian Favela Photographer Artists and community organizers work to stem violence in one of the most turbulent urban spaces in the world: the slums of Rio De Janeiro. One of them is photographer Andre Cypriano, whose startling images document the existence of those who persevere to build peaceful lives amid widespread poverty and despair. “These communities are where the violence exists,” Cypriano tells us. “But why? Through my photos I try to show where the problem is, where the solution is.”

Lebanon’s Refugee Filmmakers In Lebanon we meet filmmakers who are devoted to offering their craft to those trapped within the walls of refugee camps. By giving the art of film to members of these communities, they are providing the tools to make visible what life is like for Palestinian refugees. As one member of the Zakira Photo Project says, “When you give them the camera, they feel a responsibility to document the community, so you are empowering them.”

Political Pranksters The Yes Men are about as skilled as it gets in the art of deception. They first garnered international attention when one of them posed as a spokesperson for Dow Chemical on live television to make an announcement that would temporarily cause the company’s stock value to fall by over $1 billion. Since then, they have continued to pull off outrageous stunts, including the distribution of a special edition of The New York Times. The fake newspaper announced the end of the wars in Iraq and Afghanistan, among other improbable news, and asked its readers to think deeply about the state of our world.

Indigenous Activists We travel to the Xingu River, a tributary of the Amazon, where the Brazilian government has for decades pushed for the construction of the so-called Belo Monte dam. If built, it would be the world’s third largest dam and would displace many thousands of the region’s residents. During our visit we encountered an uprising of over 1,000 people from various indigenous communities who were joined by national and international supporters to express their unequivocal opposition to the project. Today, their resistance remains as unified as ever.

Israeli Dissidents The Israel/Palestine conflict often gets reduced to worn-out accusations and talking points, and in the process loses sight of the real human suffering that comes as its result. Jeff Halper, an Israeli citizen who has become a vocal opponent of many of his government’s policies, is one member of a surprisingly vibrant community that condemns its government’s policies toward the Palestinian people.

Hip-Hop Artists from Palestine Palestinian hip-hop group Katibe 5 carries on a tradition of socially conscious rap, even as the genre becomes increasingly commercialized in the U.S. The group is made up of five members who came of age together inside the walls of a refugee camp in Beirut where over 16,000 people reside in less than a square mile. While the plight of the Palestinian people is a central focus of their work, they rap in solidarity with other struggles around the world. As one member put it, “We’re not just Palestinian refugees speaking about our problems, or our lives in the camps, because the problems we face are not only a Palestinian problem. All over the world there are people who are oppressed, people who are incarcerated, people who are suffering.”

Monks of the Saffron Revolution In Burma, where a military junta has refused to recognize the democratically elected leadership of Aung San Suu Kyi and has ignored calls for national dialogue, voices of dissent have been brutally repressed. But there are signs of hope and courage here, too. Dressed in brilliant saffron robes, the monks in this heavily Buddhist nation have braved the possibility of arrest, torture, and even execution in order to give voice to a more humane ethics.

This is only a handful of the inspiring artists who appear in the movie. You can see them and many more perform their music and explain what motivates their work in CULTURES OF RESISTANCE.

The Power of Nonviolence: A statement by iara lee

Cultures of Resistance director iara lee states: “The Cultures of Resistance (CoR) feature documentary profiles conflicts in over 10 countries—including Israel/Palestine, Nigeria, and Burma—with a focus on how artists and musicians creatively oppose various forms of oppression. As both a filmmaker and an activist, I believe that nonviolent resistance is the only effective, long-term approach to conflict resolution. Nonviolence does not mean passivity. In fact, strategic nonviolence is often militant, active, and requires its practitioners to put themselves on the line. It uses unarmed resistance to create a crisis that undermines the viability of violence and oppression.”In the film, I try to explore the challenge of violence; I show situations where victims of injustice resort to violence in order to address their grievances. While I can sympathize with the deep frustration and legitimate indignation that motivates such action, I do not endorse their approach. I ultimately believe that artistic resistance combined with active nonviolence, as advocated by Gandhi and Martin Luther King, Jr., is the only way to break the cycles of militarism and oppression upon which so many of the world’s injustices depend.”When combating a massive military machine that profits from the creation of militarized conflict, choosing the path of armed resistance plays into our opponents’ strengths. I hope to show in my work that our strengths–the strengths of forces promoting democracy, human rights, and economic justice–are based in art, creativity, and grassroots participation in nonviolent social movements.” 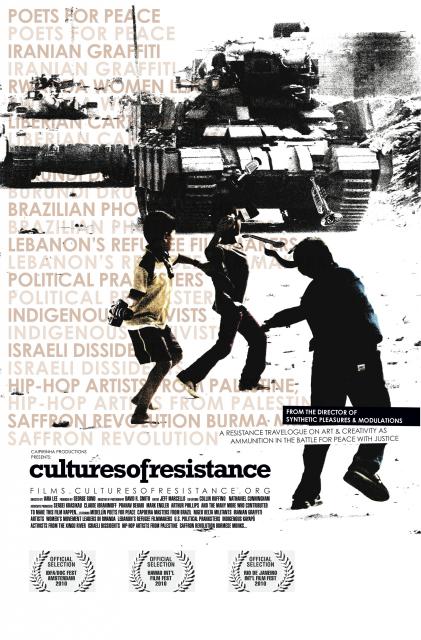 🐝🌎 One cannot reiterate enough how important

In the aftermath of trailblazing Palestinian journalist Shireen Abu Akleh’s murder by Israeli soldiers, here are some tips for journalists to keep in mind to ensure that their reporting on Palestine is fair and accurate.Our sister foundation, the Cultures of Resistance Network, is proud to support the Institute for Middle East Understanding, which provides journalists with quick access to important information about Palestinians. Past grants from the Cultures of Resistance Network supported the IMEU’s work in Gaza, including helping them provide journalists with information about the May 2010 Freedom Flotilla to Gaza. ... See MoreSee Less